On the surface, it's a yellow duck decked out in hospital pajamas and a bandana.

But while the stuffed animal certainly is perfect for children to play with, the Gabe's My Heart Chemo Duck is more than a cute toy.

Chemo Ducks come with some accessories most toys don't have: A simulated chemotherapy central line and an arm immobilizer, just like the cancer patients who receive them.

Doctors and nurses use the ducks to help explain treatments and procedures to their young patients, helping them understand what's being done and hopefully putting them a little more at ease during what can be a frightening process.

"It really promotes the emotional health and the psycho-social care of the patients, which ultimately is just as important as the medical care," said Megan Wing, a Child Life Specialist at American Family Children's Hospital. "It's a great way to tie everything together."

More than 6,000 children have received the cuddly, 12-inch tall ducks since the Chemo Duck Program was established in 2004.

The first flock of Chemo Ducks landed at AFCH in November, thanks to months of work by Regina Yocum and two local groups of young people.

Yocum was familiar with the program from her time working at another children's hospital, and began the process of bringing Chemo Ducks to Madison when she started as a Child Life Specialist at AFCH in January 2010.

"It helps so much, not only with the pediatric patients that are undergoing treatment for cancer, but also the parents and the staff - everyone from the nursing assistant who does vitals to the attending physician oncologist," said Yocum, who now works in the Emergency Department at AFCH. "They use it to help teach the patient and help them feel more in control and less scared."

In her past experience, Yocum saw patients bond with their care providers through the ducks and use them to explain their treatments to siblings and classmates. They also can be valuable tools for Child Life Specialists, social workers and psychologists.

"Letting the child talk through the duck and expressing their feelings and fears," Yocum said. "Letting the child actually be in control, be the nurse or the doctor, those are things to help with the child's control and mastery and self-image that really enhances their coping and decreases their anxiety through the oncology treatment process."

The key, though, was finding funding for the program. Each Chemo Duck costs approximately $25, which includes the stuffed animal as well as an age-appropriate bilingual activity book and coloring book for the patient and resources for parents. They are provided to patients and their families for free.

It took some time, but Yocum came upon two groups that combined to foot the bill: the UW-Madison chapter of Alpha Phi Omega (APO), a coed national service fraternity, and Teens Leveraging Change (TLC), a small group of teenagers from Beaver Dam.

APO and TLC are birds of a feather: They're both active raising funds for a number of wide-ranging charities and programs.

"They're high school and college kids who have really taken it upon themselves to make an impact in their communities," Yocum said.

APO president Meggy Demeter said her group funded its part of the Chemo Duck program through a candy sale on State Street. 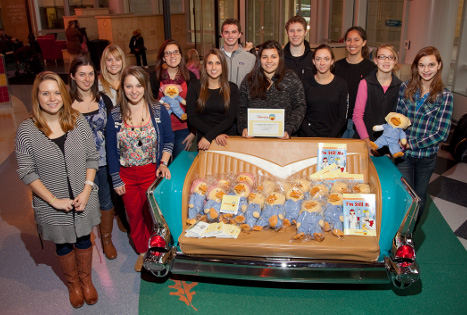 "It's amazing what the (campus) community is like and how much they're willing to help - I can't put all the credit on us," said Demeter, whose group became involved thanks to its vice president of service, Kallie Pearson, who worked with Yocum as a volunteer in the Pediatric Hematology and Oncology unit last year.

TLC also held candy sales and bake sales, sold Avon products and received donations and other assistance from their churches in Beaver Dam, according to group leader Stacy Van Buren.

The club was formed in November 2010 through the website dosomething.org, and while on the site, Van Buren read about another group that got involved in their local Chemo Duck Program. Helping children with cancer was a natural focal point for the group because three of their classmates have been diagnosed with various forms of the disease.

"When we really got started thinking about cancer, our title is Teens Leveraging Change, but TLC also is for 'tender loving care,' so it goes both ways," said Van Buren, whose club also works on environmental and recycling projects.

"I called (Yocum) and I said, 'Have you even heard of these things? Is this real?' She was like, 'Oh, yes, definitely,' because she had worked with them in the past. It's been a challenge to raise the money ... It's been a year in the making, so it's neat to be able to be here and see the ducks."

The fluffy ducks come in different forms, depending on the type of port that will be used during the patients' treatment. They instantly took flight with AFCH patients.

"It's been wonderful," Wing said. "The kids are absolutely loving it. There is one patient in particular that has greatly enjoyed doing medical play with her duck and has named him and has a birth certificate. So we kind of change the dressing and flush the line and check the blood pressure - we've been doing lots of medical play with the duck and she has absolutely enjoyed it."

While APO and TLC have pledged to continue to support the Chemo Duck Program, monetary donations can be made to the program through the Child Life Department.