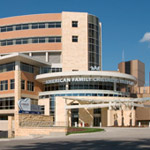 Madison, Wisconsin - For its annual Top Doctors feature, Madison Magazine asked doctors in the Madison area which local physicians they would recommend to their friends, family and loved ones.

In the 13 pediatric specialties, the overwhelming answer was a provider from American Family Children's Hospital.

Of the 53 physicians named to the 2012 Top Doctors lists, which are featured in the magazine's September edition, a whopping 42 are from American Family Children's Hospital.

Physicians honored in each specialty received 8 percent or more of the votes in online voting done in April. In categories in which no provider reached that level, the top three vote-getters made the list.

In the 57 adult specialties, UW Health providers accounted for 119 of the 203 physicians on the Top Doctors lists.

Here are the UW Health providers who were lauded on the 2012 Top Doctors lists for pediatric specialties: