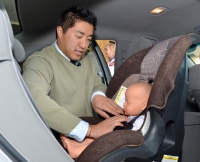 Madison, Wisconsin - Three Madison TV personalities stepped away from their microphones and tried their luck at properly installing a child-safety seat in a vehicle September 20 during the fourth annual Celebrity Car Seat Challenge outside of American Family Children's Hospital.

Andy Choi from WISC-TV (Ch. 3), Amy Carlson from WMTV-TV (Ch. 15) and Sabrina Hall from WKOW-TV (Ch. 27) were graded on six criteria concerning the proper installation of the seat in the vehicle and the use of restraints to keep the child secure. Carlson scored the highest number of points, followed by Hall and Choi.

"The sobering fact remains that motor-vehicle injuries are the leading cause of death among children," said Nan Peterson, the hospital's child safety program director. "The good news is most of these are preventable. Placing a child in an age and size- appropriate car or booster seat reduces serious and fatal injuries by more than half." 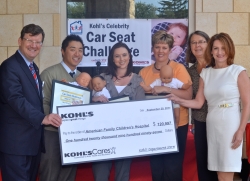 The event was also highlighted by a donation of $120,997 to American Family Children's Hospital by Kohl's Department Stores. The money was raised through the sale of children's toys and books at the stores as part of the Kohl's Cares program, which donates money to 160 hospitals nationwide for child-injury prevention outreach.

Since 2000, American Family Children's Hospital has received more than $1,178,000 through the Kohl's Cares program.